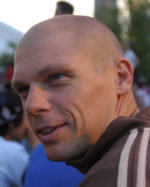 Dr Nikolai Tatarnic is Curator of Entomology at the Western Australian Museum. His research focuses on insect biodiversity and systematics, and sexual selection and conflict. Born in Toronto, Canada, he completed his BSc at the University of Toronto, followed by a master’s degree at the University of Alberta. After experiencing -40°C winters in Edmonton, Nik decided to head for sunnier climes, and migrated to Sydney for his PhD in 2004. He made the move west to the WA Museum in 2013. Nik’s current research focuses on using x-ray microtomography to better understand the biomechanics of insect reproductive organs.

The #ANZCALibrary has been compiling resources looking at #PhysicianWellbeing for the current health crisis. For th… https://t.co/tdDyC3diV0